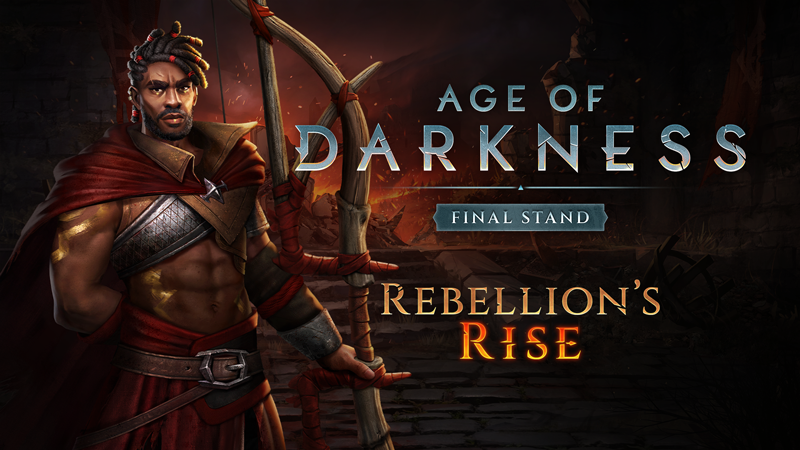 Dear Protectors of the Light,

We are ending the year with a bang with our final update for 2022, the Rebellion’s Rise Update brings some impactful and exciting new features to the world of Age of Darkness: Final Stand.

First up, we have The Rebel Arm himself, Cyrus Bravaris.

To champion the forces of The Rebellion, Cyrus is our first ranged Hero and Aelis’ sworn protector. Like our other valiant Heroes, Cyrus’ Skills consist of a Passive, two Active Skills and an Ultimate, to help wipe out all the Nightmares that come for you every night. Read more about Cyrus’s backstory, Skills and unique design in our recent blog post.

Furthermore, each Faction has been bolstered, with each receiving a brand new Unit. The Order will be blessed with the Lightbearer, a Support Unit who has the ability to heal Allied Units and cleanse them of their Horrified Debuff. The Volatists have harnessed Dark Essence to create the Harbinger, a Ranged Support Unit who can buff Allied Units to grant them increased speed. Finally, The Rebellion have gained the Rogue, a Melee Unit who can utilise their Stealth ability to sneak up on enemies as well as Gold-stealing abilities. We showcase these three new Units in the latest deep dive blog that explores their Skills and how each Units fits into their Faction.

Will Cyrus tempt you to change your allegiance to the Rebellion? Maybe you’ll strive to live within the light like the Order do? Or perhaps you’ll want to explore the Darkness that the Volatists have exploited. The choice is yours. Good luck.


Note: Age of Darkness: Final Stand has received a Steam Deck Compatibility rating of 'Playable'. The game is functional, however, some UI and text may be harder to read and interact with.

We greatly appreciate everyone who has taken the time to let us know about these bugs and crashes you’ve encountered. If you come across any bugs or crashes in the future, please report them to us either through the Steam forums, our Discord server in the ‘bug-reporting’ channel or using the in-game bug reporting tool.

Till next time Protectors of the Light…

Have a question about the game? We have a handy FAQ we’ve posted on the Steam forums that you can view. If your question hasn’t been answered there, we’ll be doing our best to keep up with questions here, on the forums and our Discord server.
Speaking of which, you can also chat with our team and ask them questions on our official Discord server here!